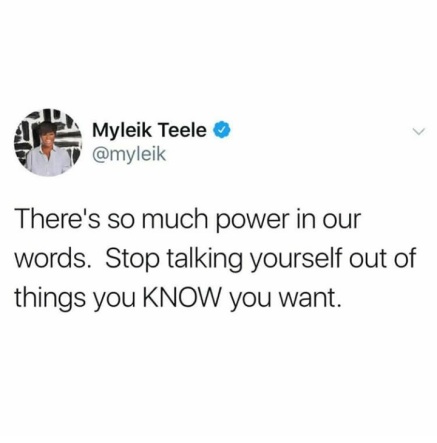 Alright so I had this beautiful blog written out, and if I’m 100% honest, it was fluff.  It was well written, but I was being more poetic than honest.  Ironically, I began the blog by saying that I would be a bit transparent and possibly a bit chatty.  I only held up one end of that bargain…I was chatty.  So with an hour and a half until publishing time, I’m starting over.

no fluff, Chris.  No fluff.

Sometimes I say things I don’t mean.  Don’t be confused, I don’t intentionally lie as I loathe lies and a compulsive liar, but I sometimes will use words idly.

without purpose or effect; pointless

Being in church and reading The Bible has taught me the power of words and speaking over myself.  I understand that what I say is what I attract, and that words have authority.  (Proverbs 18:21)  Here’s the problem, I can be very in touch with my feelings <– That’s a nice way to say I get in my feelings from time to time.  When I’m feeling all motivated, my words are consistently positive.  “You got this, Chris!  Things will work out!  Better is coming!  All is well!”  And when I’m down, frustrated, irritated, and stressed to the point of discontent, my language changes.  “Why is this happening to me?  That will never happen for me.  I always get the short end of the stick.  Maybe God doesn’t like me.  I quit.  I don’t even want it anymore…”  “I don’t want it anymore.”  But that’s a lie!  Whatever the “it” is, I do want it but my confessions don’t match that.

…Sometimes I use my words idly.

I have only ridden in a taxi cab a handful times in my entire life, the most recent time being last October when I went to Long Island, NY to perform in a stage play.  The night before the show, my cast mate and I called a cab to take us to Walmart so that we could grab a few last minute items.  As expected, as soon as we got in the cab, the meter started running.  Because it had been a while since I had ridden in a cab, I forgot how the charges and rates worked ultimately forgetting that the meter wouldn’t stop running while we were in the store.  For the 25 minutes that we walked around Walmart (only 25…that’s a miracle), the meter kept running.  When the trip was over and we returned to our hotel, we not only paid the flat rate, the charges for the mileage, but also the fee for the time that the cabby’s engine sat idling — verb: doing nothing.

Beyond sometimes forgetting how powerful my words are, for whatever reason I sometimes forget that every word that I say is recorded and I will have to take an account for it.  (Matthew 12:36).  So here it is, when things aren’t going my way, when I get pissed off in my processes, when I’m sick of waiting when I want things instantly, or when I feel as if I’ve been left out, I use idle words.  But God doesn’t shut His ears and heaven doesn’t stop taking a record of what I say just because I’m in my feelings.  The meter doesn’t stop running because of my idle words…

“I’m going to be single forever.  I’m not getting married.”  That was my response to being 29 with no prospect for marriage right now.  Instead of waiting because maybe God has someone especially for me in His time, I reviewed all my failed relationships and my singledom, and I cursed the very thing that I wanted…marriage.  Side note: this was prior to my Come to Jesus Meeting that I discussed in “First Things First.”

Truth:  I typically start denying the very thing I want for one of two reasons…

“Watch the way you talk.  Let nothing foul or dirty come out of your mouth.  Say only what helps, each word a gift.”

THE MORAL OF THE STORY

The other night my best friend pulled my card sooooooo terribly.  Here is the paraphrased version…

Him:  Chrissy, your problem is your language.  I believe much of what you don’t have is because of what you say.  *He proceeds reading the scripture above.*

I do very well encouraging others and even persuading them to speak well of themselves and over their own lives, but I don’t always take my own advice.  Too often I revert to my feelings and allow my language to follow suit.  More often than not, I cancel out my “What God has for me is on the way, and I’ll be ready for it,” with “That will never happen for me.”  But both of those phrases have power so which one wins?  Initially, I imagined my words, both the positive and negative, getting into a fist with one another until I threw more words into the ring to be the tie breaker.  I think I’m a bit off with that.  Honestly, I believe the Holy Spirit works on my behalf pressing “Ctrl + Alt + Delete” on my words before God allows them to come to pass.  “She didn’t mean that, God; she was just upset.  Please forgive her.”

“If you don’t have anything nice to say, don’t say anything at all.”

Who hasn’t heard that phrase before?  I think I heard it for the first time in preschool, and I’ve heard it constantly ever since.  Now that I’ve read the scripture above, I can see how the two are relative.  My best friend was simply trying to remind me of that old saying by giving me the word of God.  Chris, watch your mouth.  And don’t speak dirty or foul language.  This isn’t just limited to cuss words and nasty talk; don’t use CURSE words — things that bring destruction to yourself, your surroundings, or your circumstances.  Use words that help — words that will positively enhance your life…each word a gift.  A gift…something given without payment…  Aha! Chris, allow your words to add to your life without you having to pay for them later.  “The meter doesn’t stop running because of my idle words…”

Maybe you like me have your moments from time to time where you whisper (or yell) into your atmosphere things that you don’t mean.  Frustration, impatience, or an array of other emotions may make you strike a line through all of your positive confessions to began denying the very thing you want…simply because you think you can’t have it OR out of fear.  Stop it!  Your negative words are lies, and your denial of your desires are lies too.  Today let’s make a pact that we will only speak positively about our present and future, declaring faith-filled words.  And if what we want doesn’t come to pass, let it be because it wasn’t God’s will for our lives and not because we talked ourselves out of it.  Remember, your words are SO powerful…so watch your mouth!

I hope this helps.

← First Things First
This or That, or Both: Removing Limitations →

Go ahead... Say something! Cancel reply