Skip to content
Press Enter / Return to begin your search.

Frustrated, I lowered my head and let a few tears stream down my cheeks.  “This isn’t how I planned it,” I whispered as I considered how scrambled my plans had become.  What was once a clear road to success seemed congested detours, and uncertainty made me question if I’d arrive at all…

This may seem like a fluid construction of random points, but just trust me.  It will all work together to make sense of what I want to convey. …I hope.

“Always know more than one way to get where you are going.”

Growing up, my father would religiously say the aforementioned quote to me and my brothers.  In the most practical sense, I correlated his life lesson with navigating  highways and back roads.  Ironically, when he first taught me that concept, I could not drive and didn’t even really know where my house was in relation to the city that I lived in.  My sense of direction really only kicked in once I started to drive and needed to know how to get not just get around my city, but the areas that surrounded it.  Let me further say, this concept made a lot of sense in the era of printing Map Quest directions, but I deemed this quote pointless once there was an upgrade to the GPS that could reroute you in the event of slowed traffic or a road closure.  Just by random exploration alone, I’ve learned what major streets connect and which back roads avoid traffic, yet I seem to quote my Pop almost every time I dip out of traffic to take an alternate route.

If that concept made so much sense in traffic, why wouldn’t I allow it make sense in life?

“The road to destiny isn’t always linear.  Sometimes, purpose takes you through setbacks, let downs, detours, and turnarounds – leaving you to feel like you’ve failed.  It’s here that you must choose: do you care for optics or obedience?  Forget what it ‘looks like,’ run YOUR race, and know that you are where you’re supposed to be.  You’re not late, you’re faithful.”

My brother posted that on his Facebook page today…how ironic.

One of the most frustrating things for me is a last minute change of plans.  In the past I have shared that as your resident control freak, I have a plan, a back-up, and a back-up for the back-up.  I leave nothing to chance, and I leave very little room for things to not go as I have predicted.  You would think at almost 31 years old, I would accept that I have NO control over the fine details of life.  Oh, it’s not that I don’t already know this – a few times around the Merry Go Round has gotten me together.  Moreover, it’s that I won’t allow this to click within my core.  Because I won’t embrace that even the most perfected plans are subject to change, then I feel like a failure when that very thing happens.

If I can accept that my journey to physical destinations have delays, detours, and turnarounds, why won’t I allow my journey to fulfilling my purpose to have the same? 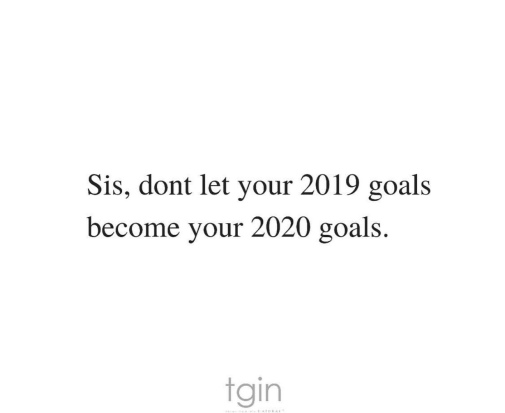 This stopped me in my tracks yesterday.  A casual scroll through my Instagram feed suddenly became my wake up call.  I’m neither 100 percent sure who created this graphic nor certain who runs the IG page that posted it, but I felt like my best girl friend had snatched me by my wig, spun me around, pushed me against the wall, and with her finger wagging said, “Getchoself togetha, girl!” before returning to her chilled glass of wine.  Y’all, this post chin-checked me!

At the end of last year, I meticulously constructed a vision board for 2019.  Coupled with my ocular display of the goals that I would crush, I wrote out a few major things that I wanted to accomplish: finish cosmetology school, launch my business, lose [lots of] weight, get my credit together, move into a new house that I could call home until I was ready to purchase a home, and the list goes on.  As this year began, I felt as if I was crushing my goals one after the other, and I was unstoppable…until I wasn’t.  What I didn’t account for was a change of plans.  Just one – ONE – adjustment to the plan  seemingly changed everything, and before long I became frustrated and seemingly stagnant.  The problem is I only considered one way to get to my goal – of course it was my way – and I was too frustrated to consider other options.

January to June… I’m almost to the middle of the year, and the rapid check marks on my goal sheet came to an abrupt halt months ago.  Truthfully, the more time passed the more rooted in my rut I became.  Over the last month or so, I have found myself so discontent with my progress because things just aren’t going the way I thought they would, and I’m running out of time – at least according to the calendar year.  It’s not that great things haven’t been happening to me or that I’m not progressing at all.  I can’t even say that the change of plans was a bad thing…it was actually amazing, it just forced me to take a route that I wasn’t prepared for at a rate that is slower than I assumed.  So here I am half-way through the sixth month of the year questioning the purpose and plans that I thought were certain for my 2019.

“I just can’t give up now.  I’ve come too far from where I started from.  Nobody told me the road would be easy, and I don’t believe He’s brought me this far to leave me.”

THE MORAL OF THE STORY

I believe the primary source of my frustration has been the deception that after struggling, working, transitioning, and trying for so long, this is it.  As arrogant as this may sound, after the last 12 years of my life, I deserve to see a measure of success.  All of these detours and roadblocks causing me to slow my pace feels like failure.  This wasn’t the kind of turnaround that I was expecting.  In a conversation with a friend, who was a bit too matter-of-fact for my liking, he basically told to me to get myself together and figure out another way to get to my destiny.  With a road block, you don’t change your destination, you change your direction.  Whew!

Yesterday, I took out a sheet of paper and wrote down my goals again.  This time I wrote them from the perspective that I am not in control of the changes along the path, but I am in control of whether or not I actually walk out the journey to completion.  Once I changed my perspective, God allowed me to comprise a new course of action.  Then by no coincidence, God directed me to the website and Instagram page of a woman who offered inspiration.  Lastly, there was reassurance… God didn’t make a brand new way to leave me stuck where I was.  He’s not only the God who gave me this purpose, he’s the also the God who make sure I fulfill it.  (Philippians 1:6) 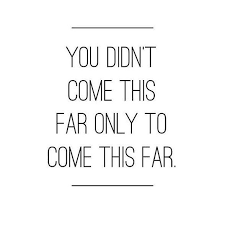 How this all ties in…

Time has no intention of slowing down, and there is no guarantee that the road will be easy.  Even when you are in the will of God and following Him to fulfill your purpose, there will be some hiccups.  Yup, you can be a believer and still not have an easily paved journey…that’s why we have to walk by faith and trust God.  Though we are shocked by the twists and turns along the way, he’s already aware and has made a new way.  It is our job to embrace that there is more than one way to get where he wants to take us.  There’s no guarantee that the new way will be quicker or easier, but at least we aren’t stuck without another option.  We can’t be so committed to our plan that we don’t continue on our path.

This isn’t it.  You didn’t fight this hard to lose here.  As a matter of fact, you’ve worked too hard to quit here.  Don’t allow unexpected circumstances make you forget why you’re on this journey and where you are going.  Even if it’s not your way, there’s more than one way.  <— I was talking directly to myself.

I hope this helps.
-Chris ❤

A lover of life, laughter, and love itself. Writing isn't just my expression but my therapy. It is my sincerest prayer that my stories touch, influence, and help to change someone's life. To understand me better, take a peek at a few of my stories! View all posts by Christen Rouson

One thought on “More Than One Way”

Go ahead... Say something! Cancel reply